The 9/11 attacks in 2001 brought fears that terrorists could slip into the US along with economic migrants, with attention turning to the more isolated parts of the frontier where most illegal crossing had moved. Whether it was terrorists, drug smugglers or illegal immigrants, the country needed to be secured against them. 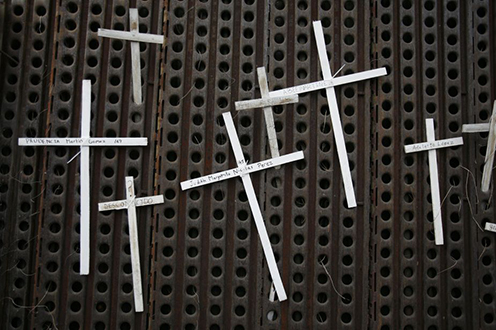 Measures approved during the Bush administration, and continued by Barack Obama, brought more and sturdier barriers with cameras and floodlights, as well as a duplication of border patrol agents. Under current law, operational control meant the prevention of all unlawful entries into the United States, including entries by terrorists, other unlawful aliens, instruments of terrorism, narcotics, and other contraband.

In 2006, the US Congress authorized the construction of a total of 700 miles (1,126 kilometers) of permanent fencing, with an average height of 4 -5 m, to seal off the border with Mexico. This would cover only about one-third of the border’s total length: A “virtual fence” would come into play as well to plug any gaps with the latest technology.

According to the Mexican National Commission of Human Rights, more than 5,600 illegal immigrants have died trying to cross the border in the subsequent years.

The majority died as a consequence of the high temperatures in the desert, dying of hunger or thirst, or getting shot by American vigilantes.

The US government has built a metal wall along a third of it, at an estimated cost so far of $2.5bn (£1.5bn), to prevent the arrival of illegal immigrants from Mexico and Central America.